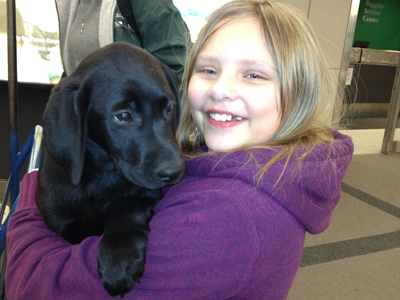 Kia is in "college" in Oregon learning to be a guide dog. At last report, she was in Phase 5, which means she can walk a sighted person, who's wearing a blindfold, around about ten blocks.

Normally, people get a new puppy a few minutes *before* they send their prior puppy to college. Most people think this helps you get over the loss of the first puppy faster.

We didn't get a new puppy when Kia left. My husband wanted a break. Something about ferrets and dogs and puppies and chaos and fur and stuff like that was his reasoning. Anna didn't want to get a puppy right away in case Kia didn't pass school. (If the pup you raised doesn't pass, they offer you the dog to adopt.) Quinn didn't want a pup right away because he was afraid to fall in love again.

So, we didn't get a puppy. We thought the next puppy truck would come in April, so I figured six months was a good break for Leon and Quinn.

But, something happened. The breeding campus had another case of Parvo, so many pups were quarantined. Once quarantine was over, some individuals needed families, and they needed them quickly.

Two months is enough of a break, right?

Well, I called up the Colorado lady and asked her how old the pups were. She said they'd be around 11 weeks. Puppies are usually sent to their families at eight weeks, so these guys needed to get off campus and start socialization.

Anna and I sent in an application for a new baby.

We got her on Friday, January 13, 2012. Her name is Bonita. She's a female black lab and she's uber sweet. She's calm and hasn't chased ferrets yet.

Anna, Quinn, and I fell in love with 'Nita straight away. I think there's hope for Leon.