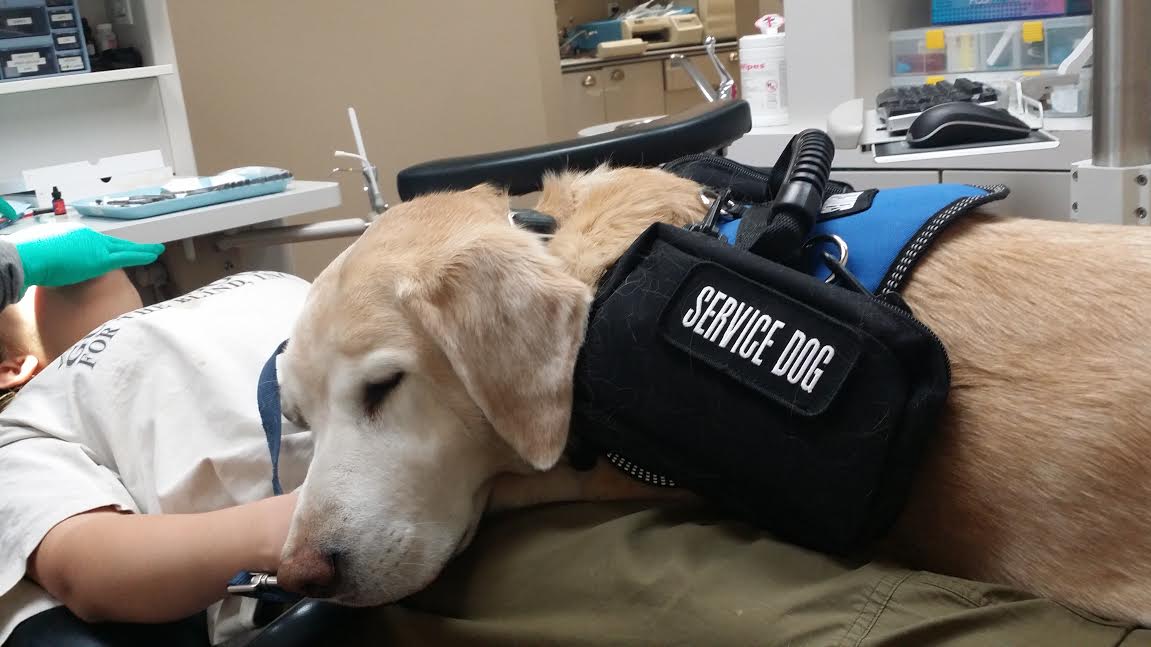 Cheetah is eight years old. She'll be nine in March. Cheetah was born on February 5, 2006 at the Guide Dogs for the blind breeding center. Her name was Conchita. She was raised by Cathy and Carolanne and graduated as a working guide. She worked for about six years when she retired.

I had let my puppy raising club know that I was on the lookout for a dog for Anna, to turn into a Psychiatric Service Dog. Heidi suggested that (Con)Cheetah try out Anna, my daughter, to both Cathy and I. We both thought it was a good idea.

Right off the bat, we dropped the "Con" from her name. Chitah and Cheetah sound the same, so Cheetah doesn't really know the difference or care. Also, the image of a fast predator is more appealing than a shell.

So, Cheetah's been here for about three weeks now.

Anna's been really good about giving Cheetah her eye drops (four times a day for the first two weeks and twice a day after that.) She set alarms on her phone to remind her. Cheetah has some kind of eye condition. Anna's also been good about feeding Cheetah. She gets two meals a day, but we replaced half of her kibble with frozen organic green beans (or carrots). Cheetah came into retirement overweight. She still needs to lose about ten pounds. Anna's remembering to give Cheetah her Cosequin twice a day, which will help Cheetah's hips and joints since she's overweight and old. Anna's also been walking Cheetah.

In return, Cheetah has already significantly helped Anna. Cheetah sleeps with her. We're teaching Cheetah to go and either sit on Anna or next to her when Anna's in a crying fetal ball. We're teaching her to find the door when Anna gets disoriented or anxious in a crowd. We made a whole list of potential "tasks" for Cheetah, but we're only working on a couple things at a time.

The first major success happened at the dentist's office. I forgot to give the kid Valium before we went in for installation of braces. Normally, for any type of procedure (shots, blood draws, fillings, cleanings, ...) the kid has to take a Valium first. Otherwise she freaks out and the medical professional tells us to reschedule and drug the kid. One flu shot took four people one time.

Well, I forgot the Valium, but I remembered the dog. Cheetah was in her blue service coat and ready to help. Anna started to freak out and I picked Cheetah up and had her lie on top of Anna in the dental chair. I joked to Anna that she was like a furry lead apron. Anna made it through the appointment. There are two reasons this helped. One reason is that pressure is comforting. (Next time you get Xrays at the dentist, pay attention to the lead apron. It's comforting and cuddly. Dogs have Thundercoats and Autistic kids or kids with anxiety have weighted vests.) The other reason is that Anna was able to pet Cheetah pretty much constantly. Cheetah, being an adult, retired guide dog, patiently stayed there for the entire hour and a half. She was such a good girl.

Anna and Cheetah have started the bonding process and I think they already love each other.

And something else that's really cool. When Cheetah first came here, she didn't seem to remember how to play. I don't think she played a lot as a guide dog. She's been playing with Anna and Casper (my guide dog puppy in training) and having fun. It took her about a week and a half to learn to play with Casper, but she has.

Now, if Anna's meds will ever get straightened out, life would be really good.

Mental illness in the news

Science Daily provides summaries of scientific journal articles so lay people can get an idea of what research is currently going on. These links are from the depression feeds.