I'm convinced that traditional schools are not preparing our kids for the work force, and this is one reason I homeschool. Schools do not encourage independent thought or creativity, and that's how our kids are going to need to think.

Check out some of the stuff I've made for my kids, also available for you. Also, I've made entire classes for the kids that you can find at our coop's website.

What and how kids should learn

My dad married my mother right after leaving the Navy. He hadn't obtained his degree yet. He worked on that degree whilst also working a full time job and supporting a wife and three kids. It took him twelve years, and he was mighty proud of that accomplishment. My dad works in aircraft, DoD, and since he isn't an engineer, I'm not sure if that degree ever actually helped him.

I grew up with several mantras. "Go to college so you can get a better job."  "Don't join the military. You'll hate working for people who are dumber than you are." "You better get a decent trade. I'm not raising grand kids."

I guess the mantras worked. My dad has three daughters. We're all married and have kids, make more money than he does, and he isn't raising a single grandkid.

Jobs, industry, and guarantees have changes over time

My collegiate experience was a little different than his though. I started college part time at the age of 14, and went full time at 16. I went to college because it never occurred to me to do anything differently. I'd been having the mantras beat into my head since I could understand English, after all.

Toward my senior year, Proctor and Gamble had a massive Reduction in Force. I took note of that since I was Chemistry major at the time. My solution was to add Computer Science to the degree plan. Computers seemed like the thing to do back then. That plan worked out well for me. I was a happy little nerd.

But I got to thinking. It's an annoying habit of mine that I can't seem to stop. Thinking. Around the time of my first out-of-college job, I noticed some things. Manufacturing plants in the US closed down and moved to China and India. Assembly line jobs all but disappeared.

How should our kids prepare for their future jobs?

I started reading books. I like John Taylor Gatto. I also read about the history of public education and the like.

By the time I was 30 and pregnant with my daughter, I had decided that I would homeschool my children.

This decision has nothing to do with religion. I'm not religious at all. My husband isn't either. My decision has to do with the future and jobs and supporting yourself.

The assembly line jobs are gone. India produces great engineers a whole lot cheaper than we do in the states. What kinds of jobs will be available for my kids? I submit that my kids will have approximately two choices: service jobs and entrepreneurial jobs. The service jobs will include doctoring, lawyering, policing, fighting fires, cutting hair, and serving French fries. The entrepreneurial jobs will be whatever people make of them. 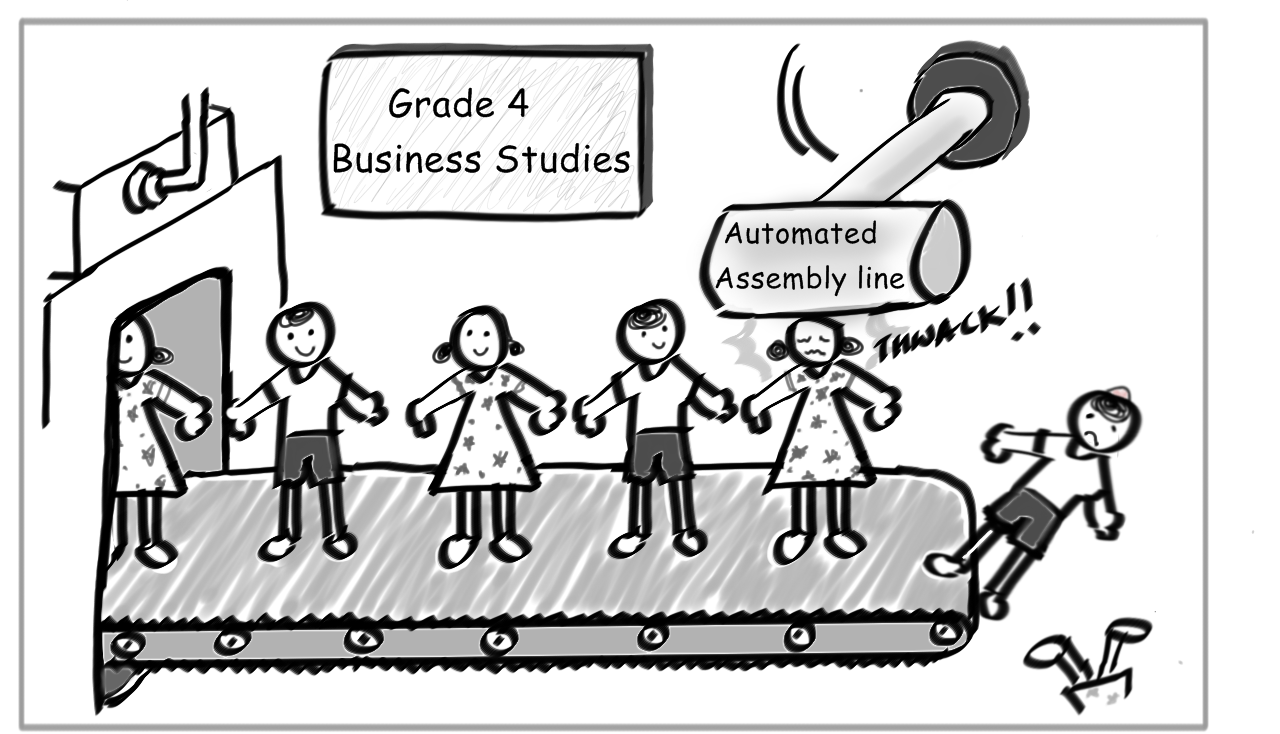 (The above picture is from a blog post on Woman,Interrupted. Her post is a bit different, but the image is perfect.)

Schools might be an okay place to learn how to deal with the service jobs, and many of those service jobs will still require a college education. I don't see medical school disappearing as a requirement of doctoring anytime soon.

Schools are absolutely not the place to learn entrepreneurial skills though.

I am a fan of Sir Kenneth Robinson, and this talk of his on changing the education paradigm pretty much summarizes what I've thought about for twenty years.

And, I don't think schools are a great place to prepare for college for service jobs. Kids need to learn how to think, and schools absolutely discourage thinking.

So, I had a chat with my kids.

What should the kids learn?

What do you need to know to be a policeman? Reading, writing, math, science, dealing with people, networking, marketing, history, art, and music. (I made some obscure case for the latter two. They both bought the thing about History—learn from past mistakes so you don't repeat them.)

What do you need to know to be a doctor? Reading, writing, math, science, dealing with people, networking, marketing, history, art, and music.

What do you need to know to be a scientist? Reading, writing, math, science, dealing with people, networking, marketing, history, art, and music.

You can probably see the trend there. After a while, I had them convinced that they needed to learn reading, writing, math, science, dealing with people, networking, marketing, history, art, and music.

We talked about how good they needed to become at each skill. Do you need to become great writers? Well, only if writing is the biggest focus of your job. Otherwise, a competent writer who can communicate what he needs to do will suffice. Do you need to learn Calculus and Differential Equations? Probably not if you're going to be a policeman, but if you plan on being a scientist, yes, you should learn Calculus and Differential Equations.

How should the kids learn what they need to learn?

So, we had talked about what we needed to learn. The next step in the discussion was how to learn it. I told the kids, "I don't think me teaching you things is the best way for you to learn." They immediately focused and got worried. "We don't want to go to school," they said. "No, I don't think school is the answer. I think you two need to understand that mommy and daddy won't support you forever, so you'll need to make money. Mommy and daddy will get old and you'll need to support us. So, you need to make money. You need to learn this stuff because you want to live in a house and have clothes and have food. You need to teach yourself. And, if you need help with Algebra, you just come up to me and ask for help."

They thought about that for a minute. Then the conversation was over. The kids were done. You might think that I'd write this being all proud of them because they started to work on math or science or reading or writing straight away. I'm not and they didn't. They are outside playing with the puppy.

What I didn't tell the kids is that out of that list of things they need to know, dealing with people is probably the most difficult.

How to calculate ocean depth with SONAR