Chip and Dan Heath, brothers, wrote this book together after they realized they both maintained a lifelong interest in figuring out how to make ideas stick, or how to teach. They combined their years of research, experience, and other people's research into a simple formula. This simple formula correlates to an idea's stickiness and can be used to create and find ideas that will stay around. The formula, S + U + C + C + E + S + S, is explained with many examples, scenarios, and stories that drive their points across. 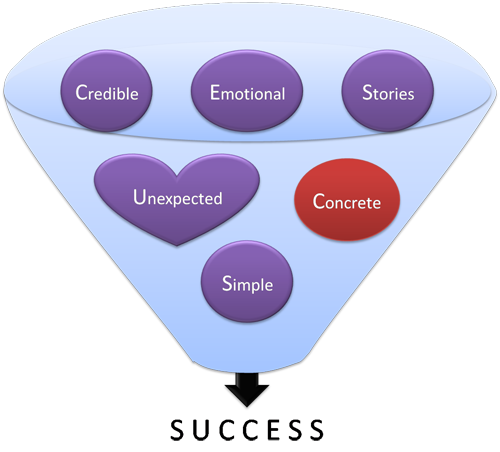 The S in SUCCESS stands for Simple. The Simple Chapter talks about breaking ideas down to their cores, and has three main discussion items that relate to keeping ideas simple: schemas, the Curse of Knowledge, and the core idea.

A schema is necessary for an idea to be simple. What's a schema? A schema is a collection of general properties about a concept or category. Toddlers have a schema for car that is something like "metal box with four wheels, windows, and a steering wheel." Schemas can be built on top of each other, so an older child might have a schema for a minivan which uses the schema of car. Higher level schemas are easier to use. The Heath brothers argue the case that the use of a schema allows an idea to have profound simplicity.

Breaking an idea down to its core idea is vital for it to be simple. It must be at its core and compact. After your presentation, story, or article, what is the one thing you want people to remember?  That is the core idea. If the core idea has the word and in it, or it has serial commas, it is probably not simple.

The third ingredient in a simple idea is to avoid the Curse of Knowledge. The people you are trying to get a message across to don't live in the same world you do. They give an example of a nurse or doctor being put on a gurney and run through an emergency room visit simulation. The medical professionals don't see the emergency room from that perspective, but from their knowledgeable perspective, and realize they need to change a few things. When you're trying to get information across to patients, you need to talk like a patient and not like a doctor.

The brothers Heath give several examples of simple ideas. Steve Jobs presented a MacBook in a manila envelope and demonstrated the "world's thinnest notebook." Southwest airlines is "the least expensive airline."  These ideas are simple because they say only one thing. They have been broken down to their core, fit into schemas we understand, and avoid the Curse of Knowledge.

The U in SUCCESS stands for Unexpected. Having something unexpected in an idea makes it more appealing. Pulling a computer out of a manila envelope is unexpected. Look for the unexpected in an idea by figuring out what is counter-intuitive about the message. Or, grab their attention with surprise. Or, make them curious by showing a gap in knowledge.

The first C in SUCCESS is for Concrete. Concrete images put a mental image in your head. As a bonus, if you have a physical image to work with, people's eyes have a place to focus. Concrete images work off of existing schemas and are easy to remember.

The second C in SUCCESS is credibility. We aren't all the surgeon general, and we don't all have Ph.D.'s, so we often must rely on an idea's internal credibility. Ways to achieve credibility include using vivid details, using sensory input, putting statistics in a human scale, using schemas, using context to make statistics meaningful, and putting the audience in the position to test the credibility. One famous ad that used this kind of internal credibility test was Wendy's "Where's the Beef?" commercials. The ad suggested that consumers get a Wendy's hamburger and another fast food hamburger and compare which meat patty was bigger.

The E in SUCCESS stands for Emotional. People are emotional and to get your message across, you need to make them care. Once you start spouting numbers, people put on their analytical hats and their ability to care is diminished. To use emotion, use associations, appeal to self-intere3st, and appeal to identity.

The last S in SUCCESS is for Stories. The right kinds of stories help people create mental stimulations, which increases retention.  When we hear a story, we actually evoke the parts of the brain that would be active if we were doing the activity.

The book is finished off with the reminder that for an idea to stick, the audience must pay attention, remember it, agree, care, and be able to act. To get the audience to be able to do this, your idea should follow most of the addends in the SUCCESS formula.

This book is good and worth the read. The examples convinced me that the SUCCESS tool is probably valid. I was amused that each chapter did present multiple ideas in it. For instance, the Simple Chapter stressed the Curse of Knowledge, the core idea, and schemas. Nevertheless, they did get their idea across and many of their ideas did achieve stickiness with me.

Should you read it? Do you need to get ideas across to people and have them stick? Not all people do. Teachers frequently need this. Business people might need this ability once or twice a month. How important is your ability to convey and get people to remember ideas? If it is important to you or your job, this book is definitely worth the time investment.