Why we believe in god(s) 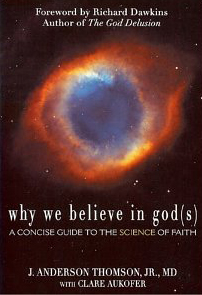 Religion is a by-product of evolutionary psychological adaptations. I read the text of the book first and then read the forward and preface. Low and behold, the book is also a video.   In fact, he made the video first and just expanded it a bit for the book. Whilst my family did not read the book, they did watch the video.

The book does what it says it will do.

The book is an introduction, and it says "concise" on the cover. Remember that when you read it, because it IS an introduction and it IS concise. Taking those two things into account (Introduction and Concise), the book does what it says. It gives you a brief, introductory reason for my humans believe in supernatural deities.

The author's approach is evolutionary psychology.

The author is a forensic psychology by trade and specializes in evolutionary psychology, so the book comes at the answer that way.

He starts with a bit about evolution, and it is just a bit. I think the author went with the assumption that most of his audience would be familiar with the concept of evolution. That seems reasonable to me.

He talks about the following psychological "modules," and points out that religiosity is a by-product of those other modules in our brains.

The "modules" we have, due to evolutionary pscyhology, that religion is a by-product of, are as follows.