Rapture of the Nerds 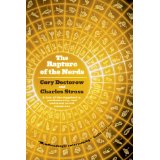 The mass majority of the human population uploaded into a cloud and floats around the solar system doing whatever. "Only" a billion humans remain on Earth, which is sort of a reserve, or a zoo, for those who don't want to upload.

Against uploading,the main character's also so much a technophobe that he doesn't even use electricity in his house. He applies for technology jury duty; he's hoping to minimize technological damage to the planet. He did not plan on his life going crazy when summoned.

That's the start of Charlie Stross and Cory Doctorow's new book, The Rapture of the Nerds. For the most part, the plot goes along well, but sometimes you need to stop rereading trying to make sense of it and just read further. The main character reveals himself and we know what, why, and how he's thinking. The other characters are consistent. The story is mostly in present tense. The book treats us to ridiculously awesome descriptions and curses. I image the authors laughed a lot coming up with most of them. It took me a week to read this book, a long time for me, because I read amusing passages to my husband and reread many to myself.

Easter egg references from Scooby Doo to Star Trek littered the book. I enjoyed the read.