I took Bonita and the kids to the Denver Museum of Science and Nature on Thursday. The last time we went, we took Kia and saw the animatronic dinosaurs. This time we saw live snakes and lizards.

Bonita didn't show any noticeable reaction to any of the snakes and lizards. Even the burmese python whose diameter was close to mine didn't seem to phase her. (But if it wasn't enclosed in glass, I sure wouldn't have been the slowest runner in the room.) 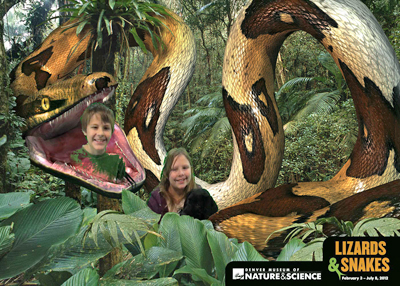 (If you look closely, you can see that Anna is holding Boni in this picture and her head is just visible.)

After we left the snakes and lizards, we stumbled upon a group of geriatric people in wheelchairs. Bonita didn't seem to care about the wheelchairs, and since there were insufficient people to help these folk into their IMAX movie, Boni and I wheeled a few people in. She marched along the left side of the chair like a trooper.

We can't seem to leave the museum without a trip through the paleontology exhibit, and Bonita wasn't phased by dinosaurs either. It's important that a Guide Dog not be startled by dinosaurs, don't you know. I mean, you never know when you'll be walking down a street and you'll pass a giant, lumbering skeleton.

Boni was most interested in those high pitched creatures that toddle around and try to pet her. Alas, she is much more food motivated than toddler motivated and she was a good girl. She had her treats and didn't eat, lick, bite, or jump upon one single child.

Best of all, a few seconds after we walked out of the museum, Bonita tinkled. Now, granted, she should have waited until I told her, and she shouldn't have had her coat on, but she went outside! She waited! This is most exciting for me, because Boni has had a bladder infection since I got her. She's been very difficult to potty train.