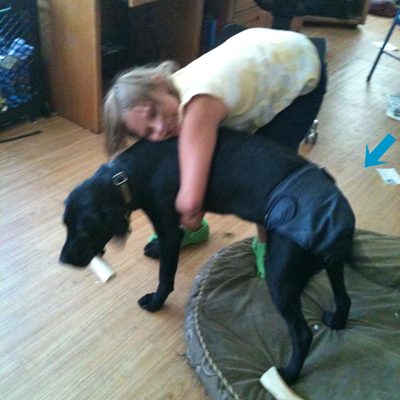 She hasn't wanted to eat her food. Labradors are known for wolfing their food, but Kia was letting her food sit so long we had to take it away. When offered food rewards for good behavior, she spit the kibble out.

She was also reluctant to do things she loved before. She wasn't as interested in wearing her puppy coat and going on trips.

And, her parts started to look swollen.

On Tuesday the 12th, she started to bleed. The good news is that I had purchased a diaper for her a few hours before. Kia's not fond of her diaper, but she's dealing with it.

What are we doing now that she's in season?

Even though we have a six-foot fence, we are going out with her when she goes outside. She's not allowed unsupervised potty time or unsupervised outdoor time of any kind. If the kids take her out, they both go out, just in case. If a male dog were to jump over the fence, one kid has been instructed to get the hose out and the other is supposed to fetch a parent.

Kia's wearing her diaper in the house. I'm not making her wear it outside. It's okay if she bleeds on the grass, just not my carpet. :-)

Kia's being sequestered. I'm told it's like medieval times and that it lasts for three weeks. So, Miss Kia hasn't been to the library or to the movies in a week. I think this might be contributing to her nuttiness.

When we leave the house and leave Kia at home, I make sure she stays in her kennel. If I don't, she's likely to shred things. She was fine being home alone before all this started.