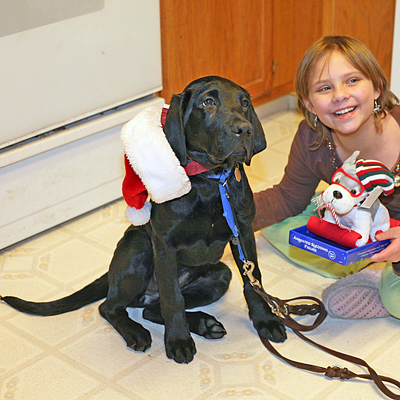 What kids don't like Christmas? Well, Anna and Kia do like Christmas. Kia didn't know what to be excited about, but she joined in once she figured out what was going on.

I don't believe in lots of presents for the kids. Leon and I usually only get them one each, or one to share. This year we got them to board games to share: Small World and Lego Hogwarts. This does not, however, stop family members from giving the kids presents.

Grandma gave Anna an annoying dog. It's a mechanical thing on a sleigh that sings a song that's cute the first ten times or so the kid plays it, and rather annoying after that.

Kia wasn't sure about the mechanical dog at first, but she became accustomed to its presence. She still doesn't like it.